THE GEESE OF BEAVER BOG
Well-written journal by wildlife biologist Dr Bernd Heinrich. He follows the life of Peep, a goose that he raised.

THESE NEWS ARTICLES ABOUT THE EIGHT STRANDED GEESE AND THEIR INJURED MEMBERS APPEARED IN OUR LOCAL NEWS MEDIA NOVEMBER 19 and 21, 2008.

Winnipeg homeowner Choo Rosenbloom is trying to save eight geese that won't fly south. The trouble is, she can't catch them. Two are injured with broken wings and the others are healthy, but appear to be guarding their injured mates in the Lindenwoods retention pond where ice is forming. 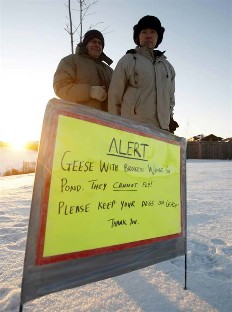 Earl Rosenbloom and wife Choo post a sign asking that dogs be kept on leashes. (Boris Minkevich / Winnipeg Free Press )
"If they cannot fly, they're going to freeze," the resident fretted. "Our pond is almost completely frozen up. And I've never seen geese at our pond hang out this long." It's very common for geese to stay with their injured family members, since they have a very strong family bond, said Henry Murkin, director of conservation programs for Ducks Unlimited. "The young would be reluctant to leave their parents if one of them is hurt and the parents are reluctant to leave if one of their young is hurt," Murkin said. Geese generally stay up north until the snow becomes so deep they can't find food, Murkin said. It's likely the geese will stay with their injured mates as long as they can find food, he said. "Survival becomes an issue and eventually they will leave." Wildlife agencies will not capture the geese, despite calls for help, Rosenbloom said. The problem with trying to help Canada geese is that they are the prize fighters of the bird world. Faced with a threat, a goose will hit the water if it can, but on land, geese will charge. They're armed, too. They have long necks, big beaks and wide webbed feet. Their bites are wicked and if they give you the boot, you'll feel like you've been whacked with a paddle. At Fort Whyte Alive, the facility south of Winnipeg that offers environmental education and recreation, visitors are told how to catch geese safely. At the Prairie Wildlife Rehabilitation Centre, president Lisa Tretiak said she'll try to catch orphaned and injured geese, but not on the water. "It's too dangerous. We encourage people to entice them, build a relationship with them with food and feed them," she said. "If they're lucky, they get captured before it's too late." At the Winnipeg Humane Society, animal rescue workers hold geese for the Wildlife Haven Rehabilitation Centre, another private agency that cares for injured and orphaned wildlife. Humane Society staff get about 10 to 20 waterfowl calls a day after the first frost, mostly about stranded geese. They will take in geese only if callers manage to contain them first in a box. The humane society has been the Winnipeg's ad hoc goose depot for years. "Through the weekend, we had about 20 calls (about geese)," Humane Society spokeswoman Aileen White said.
alexandra.paul@freepress.mb.ca

(Please CLICK HERE for videoclip. You will need to view using Internet Explorer browser. Thank you)

That's why some Canada Geese in Lindenwoods are still on the pond long after most have departed for more temperate regions.

Seems the geese aren't the only ones prepared to help an injured friend.

Once a day Choo Rosenbloom comes to the Lindenwoods pond to feed a gaggle of Canada geese.

"You see the one with the broken wing walking up," asks Rosenbloom?

Rosenbloom spotted the group of eight a few days ago. She wondered why they haven't flown south and then she noticed two of the geese were injured.

"He's got his wing hanging way down. It's very obvious you will see. The other one isn't as obvious his wing isn't hanging down it's just the way it's set on its back," said Rosenbloom.

It's very common for geese to stay with injured parents or siblings. The birds have strong family bonds, and mate for life.

Wildlife experts say as long as the geese have open water they'll be okay, but once the pond freezes over survival will kick in and these geese will be forced to leave their injured family members.

"Mother nature is cruel. It's not Walt Disney as nice as it is to think it is. The best thing that could happen to them would be for a predator to get to them," said Ken Cudmore from Fort Whyte Alive.

Rosenbloom doesn't want that to happen. She's trying to gain the bird's trust so she can capture them and get them help.

It could turn into a wild goose chase. Most experts believe the best thing to do is let nature take its course.

With a report from CTV's Stacey Ashley

EIGHT geese that won't fly south turned out to be a flock of foundlings fed by a law firm.

And none of the lawyers or their staff could catch them, either.

"These geese are part of a large group of geese our office fed this past summer," paralegal Susan Scheirich said in an e-mail from the Wilkes Avenue Ronald S. Ade Law Corporation.

At the peak of summer, the law firm says it was feeding 300 goslings, as well as the injured and healthy adults.

The lawyers thought they'd lost the geese after the Nov. 6 ice storm.

Instead, the geese moved from the Wilkes Avenue pond to another one about a kilometre away in Linden Woods.

"We're happy they are alive and kicking, but sad they haven't yet been rescued," Scheirich said.

A Linden Woods couple came forward this week to say they're feeding the geese, but are having trouble capturing them to get the birds to a rescue shelter.

Two have broken wings. The others are healthy, but appear to be guarding their injured mates in the pond where ice is forming.

As of Thursday, the flock was still in Linden Woods.

Staff recognized the geese in a television story after the Free Press publicized their plight.

"The dislocated wing gave it right away. And the picture of the one with the dropped wing," the paralegal said. Two other injured geese were among the law firm's flock, but one of them didn't last the summer and now one is missing.

"We made several attempts to contact the Wildlife Haven to see if they would pick them up. They said they would fix the injuries and release them back to the wild next year. It's just a matter of catching them," the paralegal said. "The humane society told us, 'They don't call it a wild goose chase for nothing.'"

Members of the law firm fell for the geese. "They adopted us and we adopted them... . They became quite tame, even eating out of our hands," the paralegal said. "We'd really love to see them rescued."