A beautiful tribute to the Canada Goose! 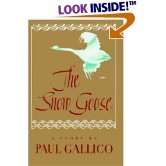 THE SNOW GOOSE By Paul Gallico

This timeless tale will be sure to delight!

This is our dear friend, Chester Sr. His white cheek pattern is shaped like a gentle ramp. You need to look closely to see that he has light white specks above his eyes as well. In addition, Chester Sr. has a long, graceful neck and a swanlike posture. Chester Sr. is a gentle, gallant gander, a fine Dad and a faithful mate. His nickname is The Gentle Giant. We've been friends with Chester Sr and his wife for four years. 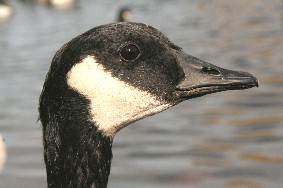 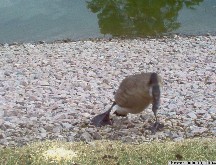 In the summer of 2004, The Chesters raised a lame gosling whom we named Little Chester (after the character on Gunsmoke) with love and endless patience and perseverance. Mrs. Chester was often seen beside Little Chester, protecting him from the threats of other geese and ensuring his safety when strangers and dogs were present. Because of his disability, it would take him much longer to get to the water but Mrs. Chester stood beside him the whole time, no matter how long it took, and guided him to the water. His father and siblings would be patiently waiting on the pond for them.

When we had almost given up hope that Little Chester would fly, The Chesters did not give up on him. He was the last gosling in the park to take to the skies.

Sadly, we haven't seen Little Chester since early November 2004, when he migrated south with his parents.

We were delighted to welcome The Chesters when they returned from the south at the end of March, 2007. They'd returned to the exact nest site they'd used in previous years. When the marsh froze solid in early April, they vanished. We're not sure if they headed back south. They returned when the marsh began to thaw.

We wondered if Mrs. Chester was ever going to nest because she was still running about April 19, her belly heavy with eggs. She also seemed anxious and  agitated, swimming erratically in an aimless fashion. Coyotes had been ravaging goose nests at the edge of town and we wondered if they were present at the nest site, which would definitely cause The Chesters some jitters. Finally, on April 20, she began nesting but not at the site she'd used in previous years. Her old nest was located a few feet from the railroad tracks, on the shore of the marsh. Her new nest is situated on a sedge island beside a mammoth power pole. We used to name geese who used such nests Mrs. Power Pole. This year, our own Mrs. Chester became a Mrs. Power Pole! 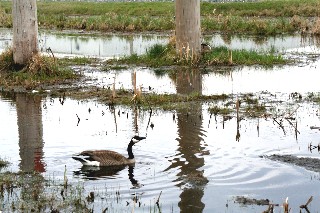 Chester Sr. patrols the nest site while Mrs. Chester (you can see her nesting on the right hand side of the second power pole) incubates.

The Chesters welcomed five goslings into the world May 18, 2007. As soon as their goslings were ready to leave the nest, they took them on a mile long walk to the park pond. They arrived safely May 19. Due to the large numbers of goslings at the park, they lost two goslings to gang brood mixing and confusion.

Thankfully, this summer has been almost perfect for our geese, with plenty of rain. The grass is lush and the water is clean, two important ingredients for waterfowl health and happiness. The Chesters enjoyed raising their three little ones and began taking their kids on short flights to the end of the park at the end of July. They left the park to show their kids the sights of Winnipeg August 2 and returned August 26. They left again and returned four days later. They have been at the park almost everyday since August 31. 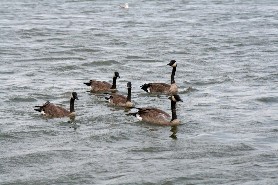 The Chesters, a happy family. Chester Sr is second from right and Mrs. Chester is fourth from right. Photo taken September 2007.

OCTOBER 15, 2007: Chester Sr. gave us a scare when he showed up with a swollen head. However, his behavior was normal and he had a wonderful appetite and was active. He just looked strange with his puffy forehead and face. 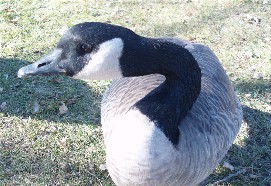 Chester Sr. with a swollen forehead and cheeks. October 15, 2007

Alarmed that he might have come down with a serious illness or allergy, we researched online and contacted our friend, Jennifer Gordon, who is the Director of Carolina Waterfowl Rescue. There were a few suspected causes: swollen head syndrome, sinusitis, something lodged in his head or an allergic reaction to something he had eaten. We wondered if we should capture him but we decided to play it safe and do nothing unless his condition worsened.

Thankfully, he was his usual handsome self the next day. We think the swelling was caused by an allergic reaction to something he had eaten and when the food worked its way out of his system, the swelling subsided completely.

The Chesters migrated south November 14, 2007, three days before the start of winter.

It brings us tremendous sadness to report that The Chesters did not return in 2008. We keep the hope alive that they will show up someday, just like Jesse did after an absence of three years. Wherever they are, we hope they're well and enjoying their lives as nature intended them to do. They remain in our hearts and in our thoughts.