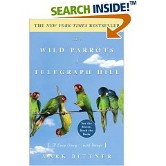 THE WILD PARROTS OF TELEGRAPH HILL: A LOVE STORY WITH WINGS will touch you!

On August 26, we realized something was wrong when we watched you struggle to climb up the rocky shore with your wings spread out for balance. We'd watched the most agile geese get to shore with some difficulty but it was especially difficult for you. Yet, you struggled valiantly to come up when you spotted us and knew we had brought you some cracked corn. 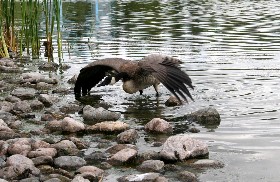 As soon as you got on land, we placed a big pile of corn before you and Earl watched over you to protect you from the other geese who would have rushed or pecked at you, knowing you were weak and unable to defend yourself. I fed the others so they were contented and would allow you to eat your food in peace.

When you had eaten all you could, you'd close your eyes and go to sleep with us beside you. Occasionally, you'd make soft comfort sounds. We knew you felt comfortable with us and had accepted our friendship; perhaps you viewed us as your foster parents. Your parents were no where in sight, after all. 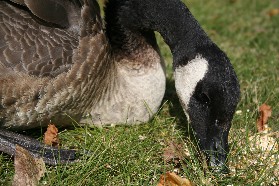 We considered capturing you and contacted the rehabilitation center. We also contacted a veterinarian as the days passed and you showed no signs of improvement. We were torn between capturing you and allowing you to remain in the park, which was the only home you ever knew.

On September 2, you were unable to get up. We knew we had to capture you and get you some help or you'd either die of natural causes or be mauled by dogs running loose in the park.

You were fairly easy to capture. You didn't have the strenght to fight. Earl decided that we should deliver you to the rehabbers immediately. They informed us that you were emaciated, just skin and bones. They tube fed you and tried their very best to help you.

After five days, they called and said they didn't think you'd make it much longer. Nothing had worked and you were slipping away. We were unable to think of anything else but you that day.

By evening, you had pulled through and the rehabbers set you up for an appointment with the vet. We rushed down to pick you up, overjoyed to see you after five days. You looked sick and weak, lying on your side in the carrier.

The vet examined you thoroughly and took two x-rays. The results were devastating. Your frail body was infected with some kind of fungus that had spread all over your lungs, causing pneumonia. The doctor did not think you'd be able to handle the rigors of further examination and treatment and suggested we euthanize you.

That was one of the most heartbreaking decisions for us. Even though we only knew you for twelve days, we had become attached to you. We had grown to love your sweet and gentle little ways and the way you'd beckon with your head and extend your little neck out to us in greeting whenever we arrived to see you. We had hoped and prayed for your recovery. We had hopes of releasing you back to the wild, back to the pond where you belonged.

But to keep you alive meant further suffering for you. You had suffered enough. You were born to be free and wild. We knew we had to think of you and not of us ..so we let you go.

We miss you, Ernest. Not a day goes by when we don't think of you. We hear your voice in the call of the geese in the park and in the skies. We see you in ET and other goslings your age when they trot up to us and make their sweet gosling sounds. We think of you when we turn our faces to gaze upward at the mighty patterns of geese that dot the sky.

You were God's little child and you'll always be our baby.