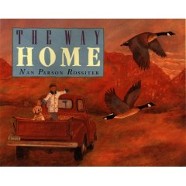 THE WAY HOME
Delightful story about a boy's love for a pair of Canada geese! 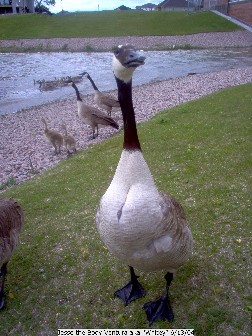 We first got to know Jesse in the summer of 2004. We named him after Jesse Ventura, former Governor of Minnesota and professional wrestler because he had the confidence and strut of a wrestler who was about to enter the ring.

When he first marched up to us with his body stiff and erect, his chest puffed up, displaying his characteristic crevice down the middle of his chest,  we were quite fearful of him. He was a gang brood Dad and we mistakenly assumed that he was about to attack us for being too close to his children. We backed away and only learned after many such bold approaches from him that he was only demanding a treat. He is really a very sweet gander, in spite of his ferocious posture. 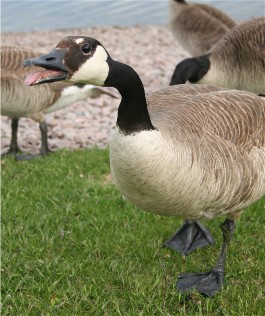 Jesse showed up at the park only once at the end of May 2005. He was with his family. They flew off to molt and returned to the park during fall migration. When Jesse returned, we noticed he was alone. He had lost his mate. As a single goose, he dropped to the lowest position on the social ladder. Other geese pecked at him and he was constantly rushed. We felt very sad for Jesse, who had been King of the Pack the year before.

Several years passed with no sight of Jesse and we wondered if we would ever see him or any of our other missing friends again. Many of our friends have not returned since we befriended geese back in 2003. And knowing the dangers and hardships they face, we knew they had a real hard time surviving for many years in the wild.

When Jesse showed up with another mate in May 2008, we were elated! 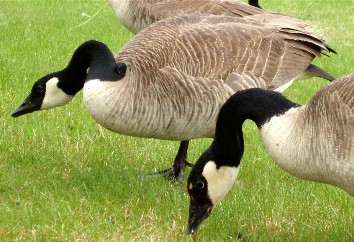 Jesse looked even better than he did the first time we met him in the summer of 2004 when he had been gang brood dad. The crevice down the middle of his chest was still visible and he maintained his confident strut and march. And best of all, he recognized us, even after all these years.

We will never know where he went during his absence or what transpired at that time. We can only guess what may have happened. Jesse may have found a new mate after the loss of his former mate. The new mate was from another pond or even from another city and that's where Jesse spent his time. When he lost that mate, he found another mate and she was from our park pond and that's how he found his way back here. It's only a conjecture, of course. Only Jesse knows what Jesse knows and he's not telling.

His return was cause for much celebration while we were missing some of our favorite geese who hadn't returned from the south this year. His return gave us hope that our missing friends will someday return, too.

We named Jesse's new wife, Jessica. They departed for their molting  grounds in early June. 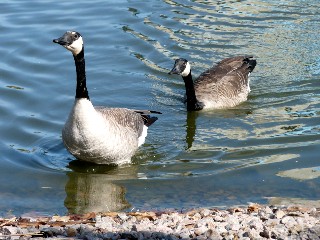 Jesse and Jessica migrated south after a snow and ice storm November 7, 2008. 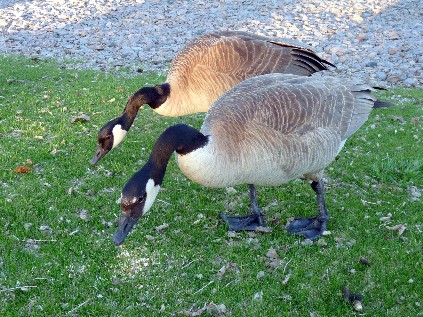 PLEASE CLICK HERE FOR A VIDEOCLIP OF JESSE AND JESSICA

To our delight, Jesse and Jessica returned to the park in May with their extended family of 14 other geese. We don't know if they had attempted to nest but they had no goslings when they showed up at the park.

We saw them one more time in May and then they vanished and we figured they had gone off to their molting location. However, they reappeared in early June and were at the park almost everyday till June 13. We haven't seen them since June 13 and we assume they've headed north to molt.

DECEMBER 2009: Jesse did not return to our park in the fall. We hope he and Jessica are safe and we hope they'll return in the spring.