"A book that all animal lovers should read!" - Choo Choo Love

THE YEAR OF THE GREYLAG GOOSE

Nobel Prize laureate Konrad Lorenz is the author of this book, the best book written about geese! 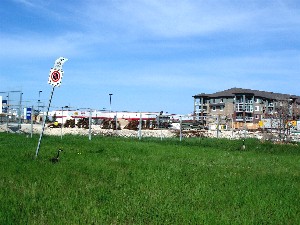 Mrs. No-Stop nests beside a No-Stop sign. Her mate watches a short distance away. 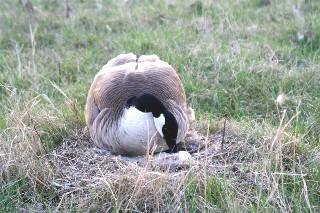 Mrs. No-Stop tends to her eggs. This photograph is featured in the April 2008 Love Canada Geese calendar.

It was a brutally cold first week of April 2007 when we noticed a pair of geese huddling beside each other near a No-Stop sign close to our house. We were surprised that any geese remained at all because the cold snap had turned the melting marsh into solid ice and ducks that had returned from the south the week before had vanished, presumably  back south to look for open water.     We offered the couple some grain but did not expect them to stay throughout the deep freeze. We returned a few days later and they were still there.     By the third week of April, Mrs. No-Stop was incubating beside the No-Stop sign. She didn't budge when we walked up to her nest and her mate would walk up toward her but not threaten us in any way. We continued to leave them a little grain during our visits. April had been wet but May was extremely dry and the small puddle of water near their nest began to dry up rapidly.
By May 11, there was no water at the nest site and we began to worry about them. Would they abandon their nest at this late stage, we wondered. Would the eggs hatch?     We brought them a dish of water and visited the next evening but to our alarm, Mrs. No-Stop was all alone. Her mate was gone! We spent a sleepless night worrying about Mrs. No-Stop, all alone at the nest site with no gander to protect her. We had become attached to the sweet little funny goose over the past five weeks.     Early the next morning, we rushed to the nest site. The No-Stops were gone. There were broken egg shells in the nest so obviously, they had had their babies and had immediately left the nest.
Linden Ridge pond was located a half-mile from the nest site. To get to it, they would have to cross a very busy thoroughfare. We went to the pond, hoping to find them there but they weren't there.     Winnipeg Technical College pond was located another half-mile from this pond. There were several ponds adjoining it. We began to visit the two ponds weekly, hoping to see The No-Stops. 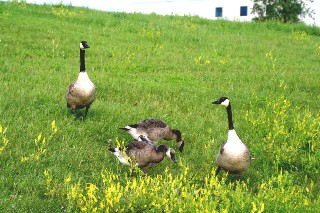 The No-Stops with their five-week old goslings. June 2007

A couple of weeks later, we spotted Mrs. No-Stop and her mate and their three goslings among the families at Winnipeg Technical College pond. We'd discovered their brooding site! Seeing them with their goslings was a  thrill for us. It was wonderful to know that the family was safe. The No-Stops recognized us and came up to us, which pleased us even more. We saw them over the next couple of weeks but by the end of July, they had vanished. We thought they might have flown away with their fully-fledged goslings, gone pond-hopping, perhaps.     Then we heard alarming news on TV: cars had plowed through two families of geese who had crossed the very busy highway beside the technical college pond. We were fearful that the No-Stops might have been  hurt. We didn't see The No-Stops again for the rest of the year.


You can imagine our happiness and relief to welcome The No-Stops back from the south in early April. They returned to the exact same location and Mrs. No-Stop's nest was  - where else? - beside the No-Stop pole!      The No-Stops became parents to five goslings. We searched for them in neighborhood ponds and finally found them raising their 16 goslings (11 were not theirs) at Daquisto pond, a tiny restaurant pond located a half-mile from their nest. That's a terrible location to raise goslings because of the heavy traffic in the shopping mall. We don't think highly of their parenting skills!

Thankfully, The No-Stops decided to trek to the Linden Ridge pond located about a quarter of a mile from this restaurant pond. Geese are known to go pond hopping when molting is over and they have regrown new primaries but with The No-Stops, pond hopping begins as soon as their goslings hatch and during the time they're molting!      We have searched in vain for the family since the summer. We hope they raised their goslings safely and migrated safely. Unfortunately, Mrs. No-Stop's nesting location has been destroyed by the city. They have dug it all up to construct a wider thoroughfare. Every time we drive by their former nest site, we are filled with sadness and longing because we know they won't be nesting at that location again and we had so many wonderful memories and photographs of our dear little goose tending to her nest beside the No Stop sign. 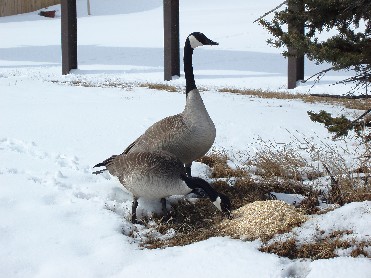 A HAPPY REUNION: Mrs. No Stop returned for the third year but with a handsome new gander.

We really were not expecting to see The No Stops at their old nest site this year because the city has destroyed it in order to widen the thoroughfare. So we were pleasantly surprised to see a pair of geese at The No Stops former nest site. As you can see from the photo above, the snow lay thick upon the ground and we guessed that Mrs. No Stop could not see that her nest had been destroyed. She had also returned with a new and very handsome gander. We named him Dos, which means two in Spanish because of his two prominent white eyebrows. You may be able to see his eyebrows more clearly in the next photo. 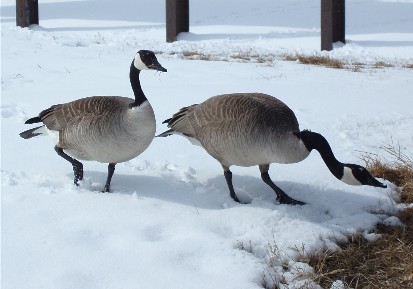 Please CLICK HERE for a videoclip of Mrs. No Stop and Dos taken the first day we spotted them.

It began warming up and the snow began to melt, revealing to Mrs. No Stop that her old nest site had been destroyed. We observed that at times, they remained at the site and at times, they were absent. By April 8, they were no longer at the site. There was uneaten grain left under the tree.

On April 10, we stopped to feed some geese about a half mile from Mrs. No Stop's old nest site and discovered, to our delight, that one of the pairs was none other than Mrs No Stop and Dos! Last year, The No Stops had spent a couple of weeks in this area raising their goslings. It didn't surprise us too much to see the pair here. They remained in this area for another week and then vanished.

On the morning of May 27, we accompanied a single mother goose (we named her Mrs. Parking Lot because that's where we first spotted her) and her two goslings from a parking lot across a busy thoroughfare to the Daquisto restaurant pond. We returned in the evening to check that they were doing okay and thankfully, they were. There was a large number of goslings and several adults nearby.

Among the adults was none other than Mrs. No Stop! She was caring for about 45 goslings and beside her and herding the goslings was Mr. No Stop!! We could hardly believe our eyes to see him! I took a lot of photographs and videoclips so that I could compare his photos to the ones taken of Mr. No Stop last year. 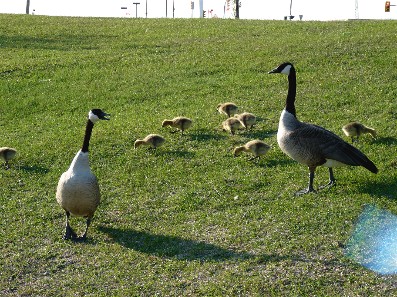 The No Stops tending to their large family 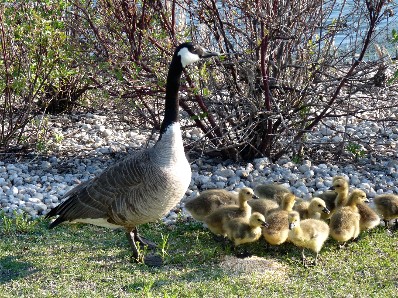 Mrs. No Stop and her babies

So where had he been when Mrs. No Stop returned with Dos - and where is Dos?

On June 14, we visited the Linden Ridge pond which is a quarter mile from the restaurant pond to see if The No Stops and Mrs. Parking Lot might be there. Mrs. No Stop was there with Mr. No Stop and they cared for about 45 goslings. With them were 7 pairs of parents and about 100 goslings altogether (including The No Stops' goslings). Unfortunately, Mrs. Parking Lot was not there.

Please CLICK HERE for a videoclip showing a triumph celebration: Mr. No Stop wins a fight over another gander and his family celebrates his victory. 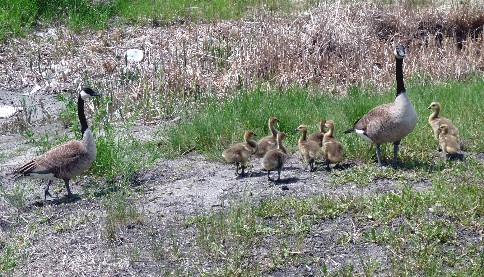 Mrs. No Stop (left) with her original mate and their 8 big goslings

On May 21, we were visiting the Wal Mart field to look for Hubble, the gander with the fishing line injury when we noticed two pairs of parents with goslings. When I got up close to them, I was delighted  to see Mrs. No Stop. We had wondered if they had returned to nest this year but we didn't know where their nest was located so we had hoped we'd spot them in one of their favorite spots in this area. We didn't expect them to show up here because this field was located across a very busy highway. Did they cross the highway to come over or were they on this side this year? I guess I'll never really know unless I see them crossing before my very eyes.      With Mrs. No Stop was her original mate, Mr. No Stop and they had 8 two-week old goslings with them. There was water in the ditch and they puddled in it. The No Stops hadn't changed their wandering ways. Their goslings would not know a permanent home for their first two months of life.      We are delighted to see our wandering and lovable pair. To know that they are well and raising another family is wonderful.
CLICK HERE for a videoclip of The No Stop family